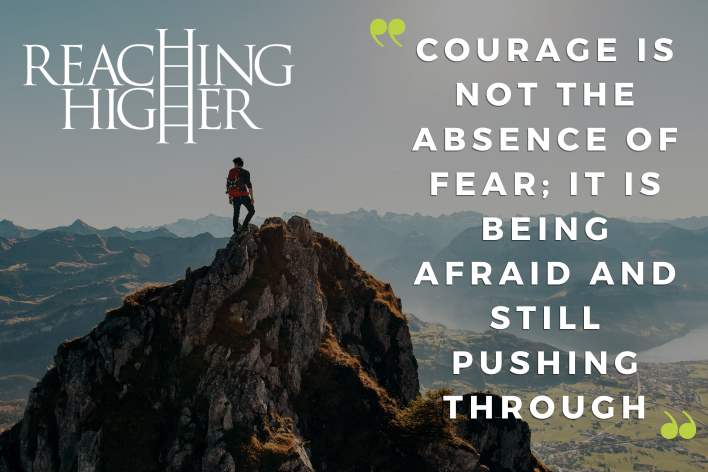 Recently, I attended a work conference where I was surrounded by empowering leaders who shared some impactful quotes. One message stood out that resonated with my journey: “Feel fear but go anyways.”

You know when you’re driving down the road, lost in the mundane of your day-to-day, listening to music and focused on getting to your destination? But then, suddenly, you almost drive right through that big, red stop sign that appeared out of nowhere? That’s fear — the stop sign that forces you to slam down on the brakes.

The thing is, although fear can’t be ignored, it can also be the green light prompting you to push down on the pedal and move forward. Fear is designed to halt, but it can also propel. Everyone faces fear. It doesn’t matter who you are, what you do, or where you come from.

We live in a scary world where terrifying and tragic things happen to us every day. There is social phobia (intense fear of social interactions), agoraphobia (intense fear of places that are difficult to escape), arachnophobia (fear of spiders), etc. But people also fear change, illness, the loss of a loved one—the list goes on. My biggest fear as a child was losing a loved one in my immediate family. I vividly remember certain nightmares where one of my parents would come in my room and tell me someone had died. I would wake up in a panic, gasping and sweating, but overwhelmed with relief when it was only a dream.

Eight years ago, that nightmare became my reality. And then, as life would have it, five years later that nightmare was amplified. It looked different when I was sleeping, and it felt a million times worse when experienced by my conscious mind. By the age of 19, I had lost both a brother and a father. I’ve shared this story hundreds of times since I was 14, and, even more so, I’ve lived it for 3,285 days. Sometimes I feel like a broken record—almost like I’ve become annoying, or people feel like “OK, we get it.” But it’s not something that can be tiresome, and it doesn’t matter what anyone else thinks because it’s my life. It’s the story of a girl who faced tragedy head-on and not just survived — but thrived. It’s a journey that demands to be shared, just like fear commands to be felt because it’s inevitable—grief, tragedy, and fear happens to everyone.

So, where does Reaching Higher fit into all of this? Well, it’s the giant puzzle piece that came into my life when I needed it most and gave me breath amidst this suffocating cloud of fear.
One of the Reaching Higher values is, “We believe everyone is meant to live a life of purpose, meaning, and joy.” After the loss of my family members, I was enduring the opposite of a purposeful life. The fear of moving forward and trying to find happiness in a life without my brother and Dad was all-consuming. The pain was smothering, and I became a shell of the young girl I thought I was becoming. I lost purpose and direction, but the very mission that Reaching Higher embodies is what saved me: “Prepare individuals to live with purpose and confidence for life.”

In an eight-week course, surrounded by inspiring mentors and vulnerable peers who experienced similar hardships and felt the same fears, I discovered my purpose. I didn’t just fear moving on after losing a loved one, I had zero idea how to pick myself up off the floor and put one foot in front of the other. But that’s where the power of Reaching Higher comes into play, the confidence and belief in oneself this program instills can change a life. Reaching Higher is not just another class that you take to earn some shiny certificate. Its transformative foundation fosters healthy coping mechanisms to be carried throughout an entire lifetime. The character-building skills tailored to youth self-esteem, social-emotional learning and stress management carried me far beyond my teenage years and once again became my life raft when I was faced with tragedy only a few years after my first day in the program.

This program, and the people who comprise it, enabled me to feel fear but go anyways. Fear is unavoidable and tragedy is inevitable, but if you allow that fear to overtake your life and halt you in your tracks, well that is the ultimate tragedy you could face. Limiting beliefs diminish your ability to grow. It’s a choice to move forward, but it’s the most life-changing decision you can make. It’s easier said than done, and trust me, I know it’s a daily battle, but it’s not impossible.

Wherever you’re at in your journey, that red stop sign of fear demands to be acknowledged, but never forget there’s an equally important green light just waiting for you to accelerate, and I’m forever indebted to this program for showing me the beauty in hitting the gas.

— McKenzi Roe is a Reaching Higher graduate and Michigan State University graduate. She is a field engagement and communication specialist at MillerKnoll in Zeeland, Mich.