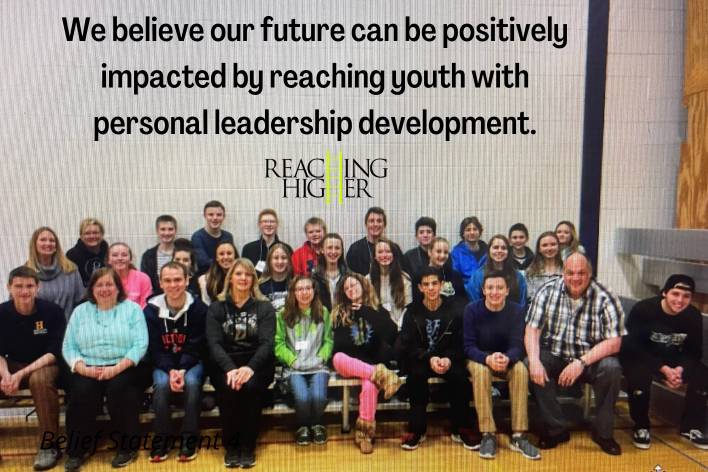 With our youth, the future is bright

Does your future seem bright? Are you filled with positive hope for the future of our world? One of our core beliefs at Reaching Higher is that we believe our future can be positively impacted by reaching youth with personal leadership development opportunities, such as our Reaching Higher 4 Youth (RH4Youth) program. We believe personal leadership development is a powerful, transformative journey that today’s young people need more than ever.

As a middle school principal for 20 years in Hartland, Mich., I saw firsthand what happened when young people stopped believing in themselves – grades dropped, attendance plummeted and behavioral issues increased. We as caring adults seemed powerless to help. We tried rewards, punishments, meetings – all sorts of things that quite often yielded poor results, if any. That is, until we began to realize that we needed to attack the root cause of this mindset and not the symptoms – we could raise achievement, improve attendance, decrease negative behaviors, and positively impact our present culture and the future for our students and ourselves as a community by helping young people believe in themselves again – by providing opportunities for personal leadership development.

Once we began to focus on helping students gain confidence, to realize that the opposite of success is NOT failure but giving up, to remind them over and over again through our own true life examples that they DID have the power to make their own positive choices and make a difference in their own stories, we started seeing huge positive shifts in all those areas of concern. We participated in many assemblies, activities, professional development, curriculum changes, and other programs all aimed at empowering students to take more control over their own education and, therefore, their own futures. One of the most powerful of all these programs and activities was RH4Youth.

One of my students, Nick, participated in the RH4Youth program as a seventh-grader. His brother had committed suicide, and Nick was beginning to make some poor life choices. Nick’s grades were slipping, his behavior was becoming problematic, and he started to explore alcohol and drugs. Nick now shares that this program turned his life around, and gave him the tools he needed to begin making positive life choices. He was able to see once again that he did have the power to manage stress, to change limiting beliefs, to strive toward his goals, to move forward no matter the challenges or roadblocks he faced – even something as crushing as losing his brother. As a high school student and even into college, Nick often returned to speak to groups of students about how Reaching Higher changed his life and helped him rediscover the power within himself that had always been there.

The magic of RH4Youth is that it unleashes the power already there within young people! This self-realization is so significant that it can transform a young person who feels powerless, hopeless, or not in control, into someone with confidence, limitless hope for the future, and the steely determination to never give up. This person is now someone who will positively impact not only his/her own future, but the future for us all.  This is a young person who truly feels empowered.